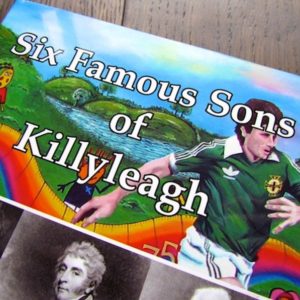 In his fifth book Clive decided to look closer to home for inspiration and chose to write about six sons from Killyleagh.

Hans Sloane lived his first 20 years in Killyleagh and it was at the shore’s edge that he discovered his earliest collecting and scientific skills that led him, during his long life, to found the world-renowned British Museum in London.

Henry Blackwood, reputedly born in the castle and who spent most of his early holidays in the village, went on to become a close confidant of Admiral Lord Nelson and was his only Irish captain at Trafalgar. He is buried in the family vault at the Parish Church.

Henry Cooke, during his 11 year ministry at First Killyleagh Presbyterian Church, championed his church’s campaign for orthodoxy and wrote his name large in the annals of his church. The present church was built during his incumbency in the 1820s.

Edward Hincks, rector of the Parish Church for the last 41 years of his life, was the world’s greatest expert in the translation of Middle Eastern hieroglyphics. It was he who perfected the ability to read, and thereby discover, the meaning of life of the peoples of Egypt and Arabia.

Terry Cochrane, whose ability to bamboozle his footballing opponents on the international arena during the 1970s and 1980s, has made him the stuff of modern day legend. He is particularly remembered for his goal against England at Wembley in 1980.

David Healy needs no introduction. Another scintillating soccer star, who scored hundreds of goals in and around Killyleagh in his youth, has entered local folk lore by having the audacity to score the winning goal in the international against England at Windsor Park in September 2005 and then, to top it all, to score a hat-trick against Spain in September 2006, again at Windsor Park.