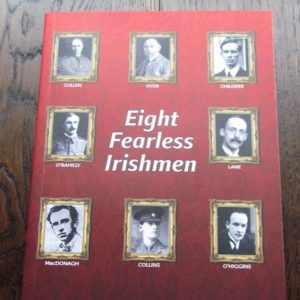 Short biographies of eight fearless and inspiring Irishmen are included in the latest book. Some of the subjects are well known but the others less so.

Michael Collins was a hero to many having worked hard to secure independence for Ireland. He is remembered for helping to conclude the Anglo-Irish Treaty in 1921. During the ensuing Civil War, however, he paid for his tenacity with his life.

Kevin O’Higgins, the man with the iron fist, successfully steered the Irish Free State through its early turbulent days with fortitude and determination and he too paid for his single-mindedness at the assassin’s hand.

Douglas Hyde, the archetypal clergyman’s son, grew up speaking the Irish language and spending his adult life promoting its retention. His contributions to Ireland are best remembered by his founding of the Gaelic League and, in his later years, as a worthy first President of Ireland.

Hugh Lane, the art dealer and entrepreneur, succeeded in showing world-class art to the Dublin masses and his legacy remains today in the form of the Hugh Lane gallery near Dublin city centre.

Michael O’Rahilly was the brains behind the Easter Rising, having selflessly advocated independence for Ireland throughout his life, only to die emerging from the blazing GPO.

Thomas MacDonagh, an aspiring but not very successful, poet and playwright is remembered for his crucial part in the Easter Rising as one of the signatories to the proclamation and one of the martyrs of that noteworthy event.

Erskine Childers, despite his Anglo-Irish ascendancy background and his commitment to the British war effort in the Boer and First World wars, left an indelible mark by his contribution to the shaping of the Irish Free State.

Paul Cullen, Ireland’s first cardinal, was a disciplinarian prelate and a selfless and fanatical man who restored a wayward Roman Catholic Church in Ireland to strict loyalty to the Vatican, never taking time out for himself.